She also has taught classes and workshops in painting and drawing at Gage Academy of Art, the Winslow Art Center and in Seattle Public Schools. 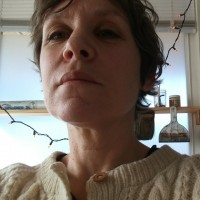