Che Lopez received his BFA from Cornish College of the Arts in Illustration and Design. He has worked as a commission painter for the last 10+ years in watercolor, pastels and oils. He has also worked as a traditional cell animator, and website designer. He works out of Calavera Studio which he created while in high school. He has shown his work at Richard Hugo House and the Phinney Gallery in Seattle. He currently owns Team Eastside MMA a Mixed Martial Arts gym in Redmond he is a US Boxing Coach. 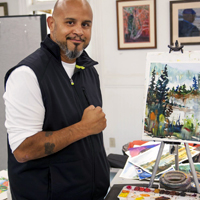