Robert Wetherington received his BFA in Ceramics and Art History from the Kansas City Art Institute in 2007 and his MFA from Cranbrook Academy of Art in 2009.

He has exhibited throughout the United States, Europe, and Korea with his most recent solo exhibition at the Malo Karpatské Múzeum in the Slovak Repubic (2014). Wetherington’s work is included in numerous collections including the Slovak National Museum and the Oegosan Onggi Museum in Korea. He has received several awards and is a Fulbright Scholarship recipient.

Wetherington currently teaches at Bellevue College and the Kirkland Arts Center. He has also taught at the Flint Institute of Arts and The School of the Art Institute of Chicago.

Robert will teach Dynamics of Ceramics 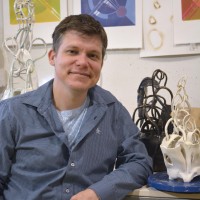